One of the most famous hot spring resorts in the Kanto region. Known as the "inner sanctuary of Tokyo," its inns and hotels are dotted along the magnificent Kinugawa River valley. When it was first discovered in the Edo period (1603-1868), only Buddhist priests and feudal lords who made pilgrimages to Nikko were allowed to use the hot spring, but in modern times it has been opened to the public. The simple alkaline hot spring is good to heal nerve pain and fatigue. In the surrounding area, there are many attractions such as the magnificent Nikko Toshogu Shrine, a World Heritage Site, theme parks such as Nikko Edomura and Tobu World Square, and nature with beautiful greenery in the spring and vibrant-colored leaves in autumn 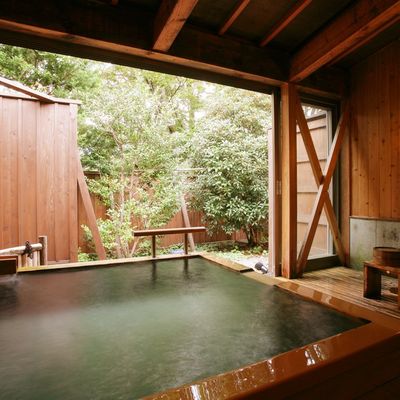 Enjoy a beautiful full-course Kaiseki dinner prepared with fresh local ingredients of the season in an authentic Japanese room overlooking a gorgeous garden. A choice of a monthly kaiseki course with menu or French course dinner made with carefully-selected ingredients. This ryokan, originally established in 1922 as a high-end Japanese restaurant, offers creative local cuisine with a theme on the colorful Nikko and Kinugawa rivers Dishes featuring Yuba (tofu skin), a local specialty of Nikko, and seasonal ingredients served warm or chilled depending on the dishes.